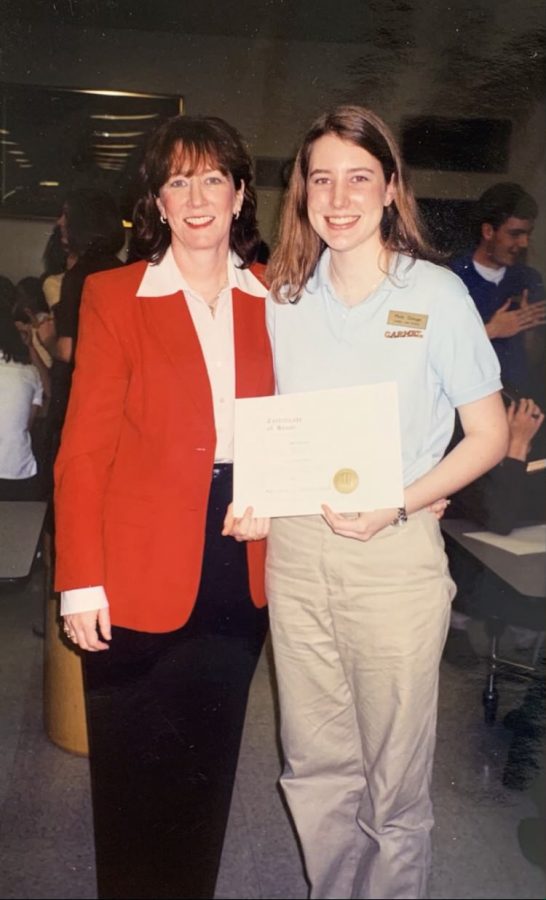 In September of 1962, Carmel Catholic High School, led by the Carmelite priests, opened its doors to teach young boys. The following year, the BVM Sisters opened another side of the school for girls. Despite being in one building, these two schools were quite separate, and the school looked a lot different than it does now.

Up until 1988, CCHS remained a split school, with a glass wall in the 400 hallway separating the boys-half (the area now containing the 100-300 hallways) from the girls-half (the area now containing the 500-800 hallways). According to Joyce Haqq, the current choir director and a 1989 graduate of Carmel, “the only time girls and boys could mix was in the lounge before and after school and during lunch.”

“There were also a few co-ed activities like the spring musical, the Street Scenes student-show, and co-choir (now known as Carmel Cadence show choir),” Haqq said.

Although the Fine Arts wing wasn’t built until 2012, Carmel has been offering choir, band, musicals, and the Street Scenes student-show for decades.

In the early 2000s, Carmel’s legacy continued—along with many of the activities. Drama classes started being offered after school, and the drama club put on many skits, in addition to their many shows throughout the year.

“We would put on skits for anything Carmel needed, from acting at prom assemblies to reenacting the Stations of the Cross (now performed by Carmel’s Orchesis Dance Company),” said English teacher Molly Daluga, graduate of Carmel in 2006 and former drama club member.

One of the biggest ways Carmel has changed in the past decades is with the addition of block-scheduling, as all classes used to be every day. Also, before the last 10 years, Carmel’s hallways weren’t associated with specific subjects. For example, English teachers and math teachers could have classrooms next to each other. The addition of the science wing in the early 2000s and the addition of the Fine Arts wing in 2012, as well as the recently-added Engineering Department, have provided students with many new elective choices to enhance their Carmel education.

Additionally, some of the old school traditions have been lost or altered throughout the years. International Week, which in recent years has been only celebrated through the wearing of different colored shirts each day of the week to represent different languages or cultures, used to be a bigger deal. In the 1980s, it used to consist of a large food fest where the foreign language students would bring in food to the cafeteria pertaining to their country, such as crepes from France.

In the early 2000s, not only was there an international food fest, but the foreign language classes would also make banners to celebrate different countries. “The drama club would put on an international play in another language, usually Spanish. We would spend the school day performing the play, and students would attend during their foreign language class time,” said Daluga.

Despite the small changes in the organization of the school, Haqq and Daluga agree that the strong sense of community and spirit throughout the school has remained the same throughout the years. “There’s something special at Carmel compared to other high schools I’ve taught at about the way teachers truly care about their students,” said Haqq.

Overall, attending Carmel has been a positive experience for many, no matter when they attended. This is why Daluga and Haqq chose to return to Carmel as teachers, and it is why so many teachers have attended the school and taught for a long time here.

Haqq says that her favorite memory as a Carmel teacher was hearing Carmel Cadence’s name called at the Chicagoland showcase competition and seeing the excitement on her students’ faces when they realized they placed. Daluga loves celebrating international food fest with her seniors every year during one of the last weeks of school.

It is moments like these that make up Carmel and create the positive reputation of the community it maintains. Throughout the past 50 years, the generations of students and the look of the building have significantly changed, yet the sense of community and the teacher’s devotion to their students has remained the same.