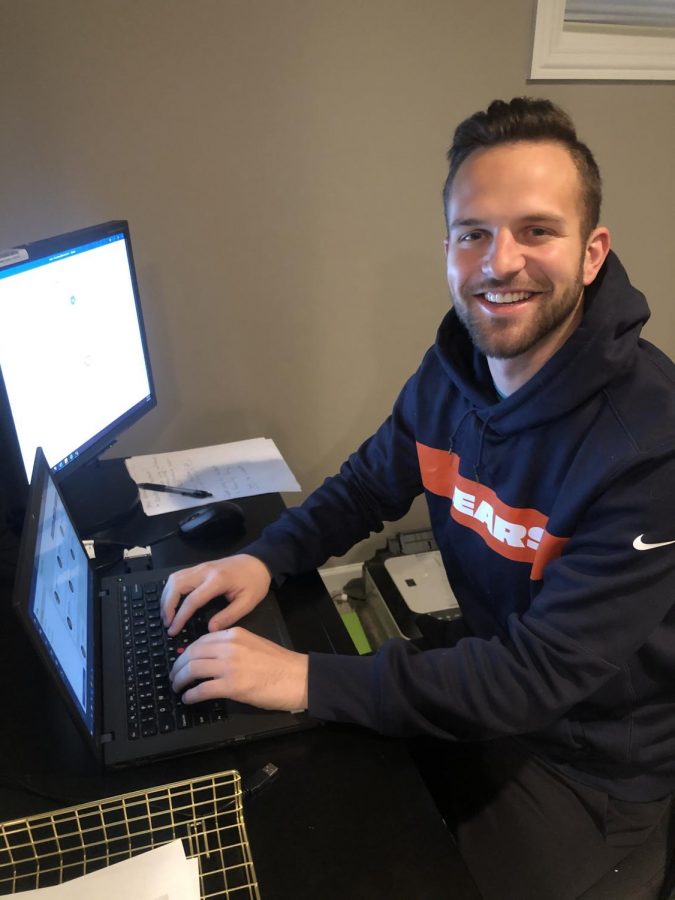 The Chicago Bears football team has had to adapt and conform to the 2020 pandemic, and Carmel graduate and Events Coordinator Drew Izban is right in the middle of it.

Izban, Class of 2013, is in his fifth season with the Bears, and the pandemic has forced him to adapt while working in the office.

Izban works with the yearly events the Chicago Bears host, including the Draft Party in the beginning of April, Training Camp and the 5K in July, and game days throughout the season.

The Draft Party was cancelled on March 13th, Training Camp in July and game days were reduced to no fans at the site, and the 5K was made virtual instead of in person.

“Game days are different because the whole experience for the game, from my point of view, is obviously the players playing, but it’s the fan experience,” Izban said.

One difference Izban noticed from years prior and this season is he has to be approved to visit Soldier Field while normally he just left to go and he hasn’t seen others in his team as often as he normally would.

Izban feels like communication is the most important part of adjusting to Covid 19 and is what hasn’t changed in his department.

Some things that have changed due to Covid are social media coverage and no fans at the games.

“Without fans, it’s the players. They need some sort of energy; they’ve got to strive through their own energy. You can tell that they’re hyped. They’re a good team, we know they are, but the fans really add that element of surprise. … It gets the players going. … The game is for the fans. The fans are our heart and soul,” Izban says. He noticed the football game against the New York Giants felt more like a practice than a game, which is mostly because of the lack of cheers, boos, and overall noise of the Bears fans.

When asked what precautionary measures are being taken to help keep players and staff safe and healthy, Izban said, “The club has made us feel very safe. I feel safe going into Halas [Hall] at all times.” Similar to Carmel, the employees have to go through daily screening checks just to be able to go into work. Unlike many employees, Izban goes into work for all five days of the week. Other measures include provided masks, hand sanitizer and Clorox throughout the site, and tiers structured like Carmel’s cohorts.

Izban feels like his strong foundation and background at Carmel Catholic High School led to the adaptability that is very useful in the current times.

The lessons he learned at Carmel are his work ethic and how to succeed in life.

“Carmel has taught me some amazing work ethics that have helped me out at the Bears every single day. I think that’s what’s so incredible and that’s why I am at the Bears is because of Carmel Catholic. Luckily I was blessed with an opportunity at the Bears,” Izban said.

Izban credits Carmel teacher Mrs. Titterton for helping prepare him for his occupation with the team.

“She’s amazing; she will get you on the right path. I had an International Business class with her… and I think that’s when it kind of clicked.”

He says that he knew he wanted to be in sports management because of Carmel.

Some activities Izban joined while at Carmel were basketball and concert choir. He met a lot of his friends at the choir, and they all went to the University of Missouri together, even though he left after three semesters to find a better sports management program at the University of Illinois.

When asked about how Carmel prepared him for these challenging times, Izban said, “It sounds very cliché, Carmel has started everything for me. Carmel is an absolute blessing. Carmel really teaches you values and teaches you how to be professional, and that’s from the start.”

Update: How did the season go? The Bears started off the 2020 season with a bang, winning against the Detroit Lions, New York Giants, and Atlanta Falcons to put their starting record at 3-0. In the next four games, the Chicago Bears played against the Indianapolis Colts, Tampa Bay Buccaneers, Carolina Panthers, and Los Angeles Rams. Their record at the end of these four games was 5-2. The month of November brought four losses, the New Orleans Saints, Tennessee Titans, Minnesota Vikings, and Green Bay Packers all bringing home the win and making the Bears’ record plummet to 5-6. The month of December was infinitely better, with three wins against the Houston Texans, Minnesota Vikings, and Jacksonville Jaguars and one loss against the Detroit Lions. As the month of December drew to a close, the Chicago Bears had a record of 8-7. The Bears, hoping desperately for a playoff chance, played the Green Bay Packers at home in the frigid Soldier Field, even though both teams are used to the chill. Even though they lost, making their regular season record 8-8, the Chicago Bears advanced to the playoffs and the New Orleans Saints in the Mercedes-Benz Superdome. The playoffs. The Chicago Bears desperately wanted to overcome themselves from the infamous ‘Double-Doink’ that has plagued the minds of Bears fans all throughout the season. The Chicago Bears went into the Wild Card Round against the Saints, but lost and were eliminated from the playoffs. Let’s hope for a better season next year!!