Love For My Own Skin 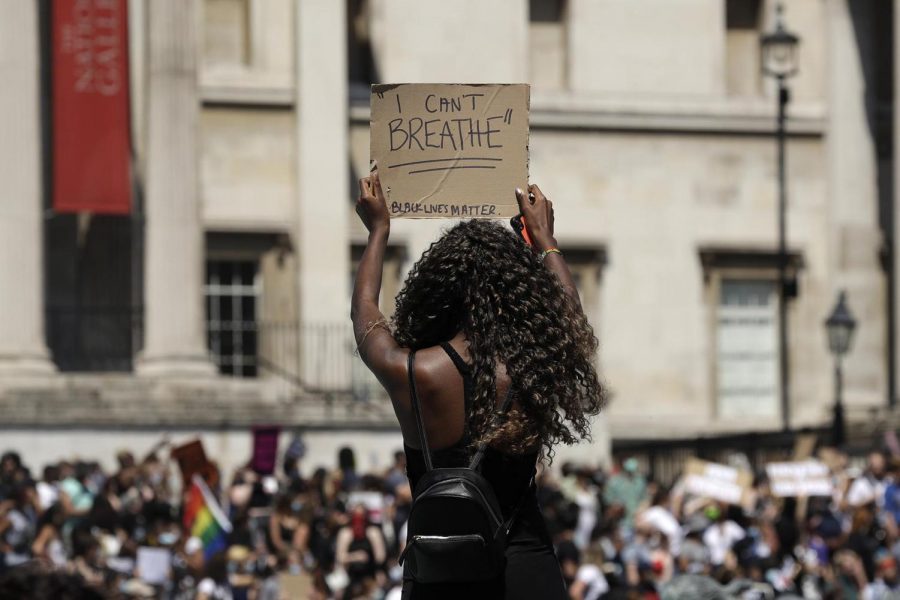 A woman holds up a banner as people gather in Trafalgar Square in central London on Sunday, May 31, 2020 to protest against the recent killing of George Floyd by police officers in Minneapolis that has led to protests across the U.S.

Black History Month. A month where Black triumphs are looked at closely and spoken of positively, as well as celebrated. This month of recognizing African Americans in history as well as their achievements began officially throughout the U.S. in 1976.  Personally, I never knew the exact reason behind the creation of Black History Month, but I understood its purpose. Its purpose signifies a month for African Americans to fully embrace their color as well as culture and share it with others around them—or at least this is what I believe to be the point of Black History Month.

The earliest memory I have when I was learning about Black History Month was in elementary school. I would learn about Civil Rights activists and then play trivia games on them. My elementary school would make morning announcements to inform students about an African American figure in history, and we, the students, would have the chance to guess who the person was. Many students got involved, and, at the end of the week, the winner and special person would be announced. In the five-day school week, my school would talk about different people each day, and so, by Friday, there were five winners and five Black figures who we had learned about. I thought that it was pretty educational, but that was honestly my only opinion about the month—a month of learning. I was unaware of Black History Month’s true meaning, and, even to this day, I am not sure I fully comprehend its significance. It is unfortunate, but when most of Black History Month for one’s life has been primarily studying for tests on the lives of African American figures, it’s difficult to know what it means aside from that. I didn’t fully grasp its significance in my life until last summer.

Last summer, I watched and listened to the news detailing another Black man and Black woman’s deaths at the hand of police officers. Reflecting on the summer and entering a month devoted to Black history and its people, the meaning of this month has changed drastically. It is no longer just about African American history. It is about the events such as those that occurred over the summer. The fact that issues such as these have become so normalized this past year means that there will be a great discussion on how the summer changed Black History Month. This doesn’t necessarily mean that the month will stop highlighting important African Americans, but it does mean that it will be seen in a slightly different light. Now, the month will especially focus on the lives that have been lost to police brutality. Even if it is not the declared focus, it will be on the minds of many African Americans—it is on my mind. Last summer has changed so much for me. It has made me come to value Black History Month far more than ever before and has given me a definition for it. I define this month as one that is similar to the New Year. In this sense, the “newness” that Black History Month brings is one of a new understanding of cultures and a possible resolution that can be followed for the rest of the year. An understanding of not just the culture behind African Americans, but of all Blacks as well. By seeing the entire Black community, we are making the month recognize the richness of Black history. The inclusion of all Black people means that we are finally giving an oppressed people a month that they deserve, a month that celebrates the diversity among them. This new mindset is part of what makes Black History month a new kind of one since we are allowing ourselves to be more open to all the Black cultures around us—just like how the New Year allows us to start a new year with a fresh and open mind. With this, we can make resolutions on how to go about the next year after being further educated on Black people in history who advocated for themselves. As we learn about key Black figures, we see examples that we can use and follow in order to foster change—in order to not have to go through another summer such as the one that occurred in 2020.

This month allows me to embrace my skin because I value its authenticity and the history of amazing people who share the same tone—a tone that I willingly love. I will cherish the month of February, for it increases my love for my own skin, causes me to reflect on the past, and pushes for the change that Black people warrant.