Young Voters Ready to Make a Difference in 2020 Election

On Sept. 29th millions of Americans tuned in to watch the first presidential debate of the 2020 election season between Republican nominee, Donald Trump, and Democratic nominee, Joe Biden. What some Americans might not realize is how many of those viewers were high schoolers. 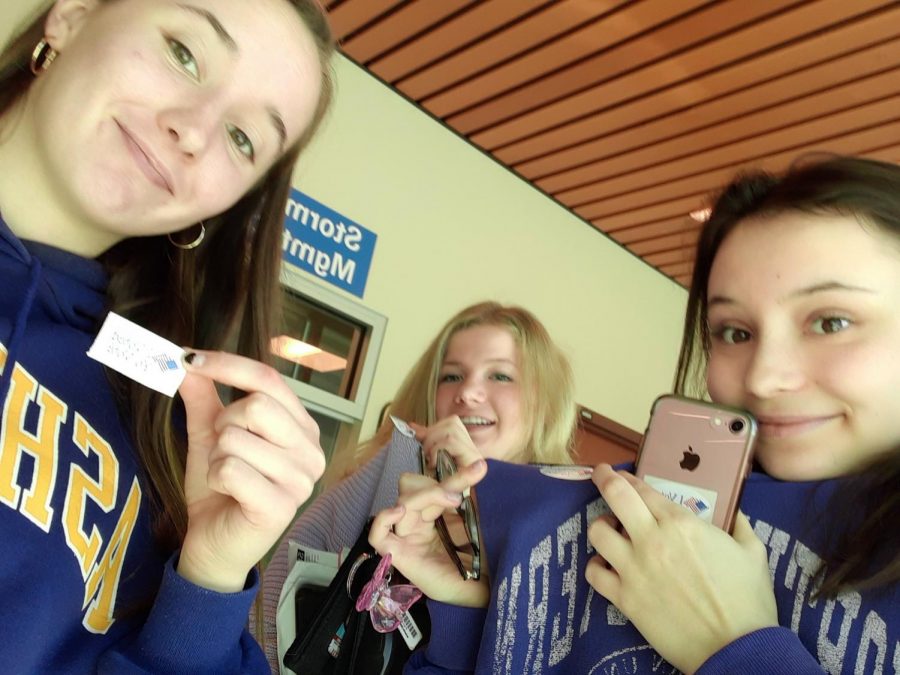 Students show off their "I voted" stickers after they voted in the primary election. Last March, Mr. Waddle took eligible students from his classes to vote. Mr. Waddle has also been registering students for the election in his classroom.

Evidence shows that civic involvement in America’s 16-21 age range is on the rise. CIRCLE, a research and data platform that focuses on civic engagement in America, reported that the 2018 midterm elections saw the highest young voter turnout in the history of their database. In addition, their research shows that over 75% of young voters are paying attention to the 2020 election and believe that it will have an impact on their communities. A Pew Research Center report states that one-in-ten eligible voters in the 2020 election will be members of Generation Z. Young voters have the potential to make a major impact on this year’s election, and it is clear that they have already started.

Young people have gained national and global recognition for their political involvement. 18 year old music icon, Billie Eilish, made headlines by performing at the virtual Democratic National Convention this year. On a global scale, 17 year old activist, Greta Thunberg, has had an impact on global environmental regulations and was named Person of the Year by Time magazine.

Carmel students are no exception to this trend. The Corsairs have been making  their voices heard through activism and participation in their communities. Last January, a group of Carmel students attended the March for Life in Washington D.C. to promote pro-life issues. Over this summer, Carmel students participated in demonstrations in support of the Black Lives Matter movement. They shared videos and pictures of these events with their peers through social media.

There is a percentage of the Carmel senior class who will be eligible to vote in the 2020 election. I had the privilege to interview some of them. Everyone that I spoke to who is eligible will be voting in November. Despite the challenges that this unique election year poses, these seniors are motivated to vote. Senior Isabel Ashley expressed her excitement to vote and her confidence that “voting centers will take the correct precautions to ensure the safety of the voters” during the pandemic. Another registered voter, Eric Acevado, told me his voting plan is to go early in person to avoid big crowds on election day. Senior Anaise Fitzpatrick told me that she is also planning on voting in person, but is glad that people who do not feel comfortable voting in person have the option of using a mail-in ballot.

Students from Carmel have taken on the responsibility of educating themselves for the election. Eric Acevado told me that he has prepared for the election by taking online quizzes that match his views with candidates. He has also learned about the needs of his community through volunteer work where he helped with census and voter registration. Isabel Ashley also learned about the candidates running in the 2020 election through an online quiz. Her AP American Government class was required to take it as an assignment. Students have also learned about current events from social media. Influencers have taken to social media to share their political views.

A concern some people have about information from social media is that it is possible that false information about candidates can go unchecked on certain platforms. Eric Acevado expressed his concern that some young people “receive their news from one platform and do not consider the other side or the biases associated with their news source”. Anaise Fitzpatrick also expressed concerns about young people determining what information is reliable, but she said she was confident in young people’s ability to determine the credibility of sources.

Another unique characteristic of young voters is that they talk about politics with their peers. Eric Acevado told me he is comfortable talking about politics with his peers because he knows that they will be respectful of each other even if they have differing opinions. Isabel Ashley expressed similar feelings. She said that she likes to talk about politics in order to hear different opinions on a variety of topics. She said that “2020 has been a huge year of change and challenge and it has been interesting to see how people react and respond to the changes in sharing their own opinions and ideas about certain topics”. Other students have been cautious about sharing their opinions. Aidan Day told me he is apprehensive because there is so much polarization in politics right now.

Despite his cautiousness to openly discuss politics, Aidan expressed his observation that young people are passionate about voting. He said that “We know what we want and most aren’t afraid of saying it.” Eric Acevado said that he senses some young people are discouraged by the idea that their individual vote does not matter, but he also said that he strongly believes that our votes can make a difference especially on a local level. Cassidy Dungan expressed her feelings on this by saying that “our generation is pretty passionate about voting because we understand that that’s how we can make a contribution to our country”.

This year young people across the country tuned in to watch the first presidential debate. Whether they were at home with their family, on zoom with their friends, or watching a recording in a class, they were engaged and interested in the future of our country and were discussing the proceedings with their peers and formulated their own opinions. Young people are passionate about their views and ready to make a difference in the 2020 election.