Not Afraid to Fail

Rebecca’s project was about how a spill hole in a parachute would affect the descent rate of a rocket. The descent rate is how fast the rocket would be falling. Zurek wondered how the size of the parachute drag and stability would affect the spill hole size. She earned Best in Category award for Aerospace Science at the Illinois Junior Academy of Science State Exposition. Zurek also received two gold certificates for both her poster and paper presentation entitled Hole-y Chute!.

“I found that a larger spill hole makes an immense difference and did some follow-up calculations on what the full-size parachute would be for each of the parachutes,” Zurek said.

Rebecca enjoys doing work on aerodynamics, or the movement of air around an object. She became interested in this topic because of her competition last year. She needs to cut a large hole in her parachute to fit in the rocket. Rebecca questioned whether a spill hole really affects the duration of the flight.

“She took a very simple experiment but took it to a very high level of accuracy. Rebecca is very thorough, she knows what she wants and is not afraid to fail.” Science Teacher Suzanne Huntemann said.

While completing among 970 other student scientists was difficult for Zurek this past year. She thought it was fun meeting new people and working on my public speaking skills.

“When I won, I was ecstatic. I was excited to represent Carmel with winning two golds and the best in category at the state competition. It is really cool to start something at Carmel and represent our school in a positive way.” Zurek said. 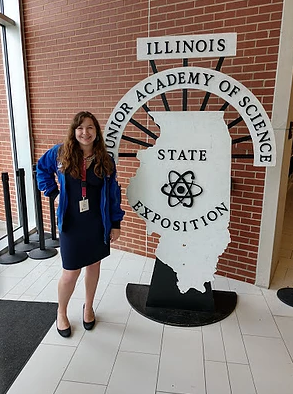