Kicking Through the Season

A walk through senior Jill Walsh’s rise to stardom. 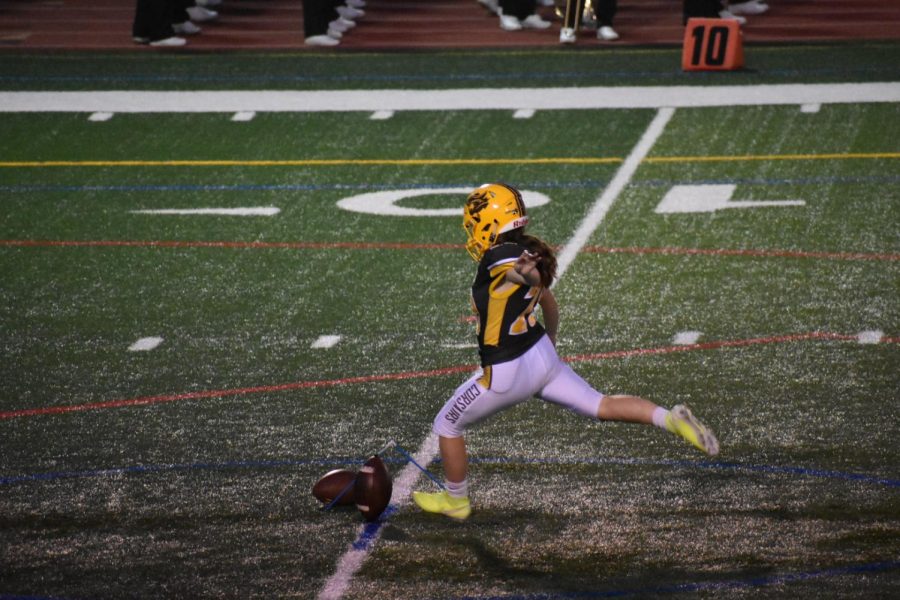 Blinding lights flood the field. Sweat drips down the bodies of the football players. Hundreds of people in the stands hold their breath in anticipation. None of this fazes senior Jill Walsh as she focuses on one thing: kicking the ball to score a field goal.

Since freshman year, Walsh has been working her hardest to help lead the football team to victory.

“I had some friends on the team and they said that they didn’t have a kicker,” Walsh said, “so I decided I would give it a shot.”

As nerve-wracking as joining a sport that few female athletes play is, Walsh has had nothing but fun and received lots of support from her teammates.

“The boys are super supportive,” Walsh said. “None of them thought it was weird I was playing or that a girl shouldn’t be playing football.”

Not everyone can be as supportive as the boys Walsh plays with, but she knows that they’ll always have her back.

“When I go up to kick and players on the other team are saying stuff to me, my brothers protect me,” Walsh said.

“She comes to practice everyday and works hard,” Annen said. “Myself and the team knows and expects her to be consistent and work hard. She does both of those and performs at a high level.”

Her leadership on and off the field is what makes them a stronger, more efficient team.

“A few qualities that Jill brings to the team are leadership and consistency,” Annen said. “She is able to step up and lead the team both on and off the field.”

Her love for the sport continues to grow every game she plays and her determination to bring her team to victory, rises even higher.

“All teams encourage each other to do better and get stronger,” Walsh said. “All teams are working towards the same thing, success.”